The Man Behind The Land Speed Record Challenge

Rosco McGlashan has been synonymous with the very peak of speed sport in Australia from an early age. He built his first open wheeled “Rod” at aged 12 and started his motor sport career riding competition motorcycles at Surfers Paradise International Raceway. 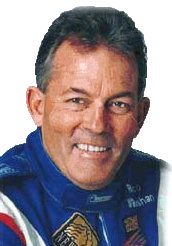 His love of  all things mechanical led him to completing a Motor Mechanic Apprenticeship and later he specialized in Auto Transmissions. His love affair with speed saw the development of an  amazing Australian designed and built V8 powered motorcycle affectionately know as “Crazyhorse” . This incredible machine had no clutch. Sitting on a cradle with the rear wheel starting to spin Rosco would give it a rev and just rock it off the cradle! "It spat me off a few times and when it spat you off, it did it in a big way!" remembers Rosco.

This was followed by an even higher performance rocket ­powered bike which was so fast that it was not allowed to be raced on Australian tracks. Also the very volatile hydrogen peroxide rocket-fuel was very hard to come by because of its unpredictable characteristics and was soon banned by the Australian Government. To even think of such a machine, let alone ride it further adds to this mans infatuation with speed and his 'dare to be different' approach. You can't help but wonder what this machine would have done if allowed to have it's head... the mind boggles!!! 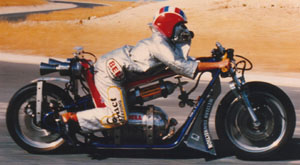 During 1980 Rosco lived in the USA and was instrumental in the development of a rocket powered Go-Kart in which he hit 253mph (407 km/h)! "It was incredible feeling sitting in that thing with the fuel bubbling and gurgling just behind your head and then hitting the throttle" says Rosco with a smile, "It was truly an awesome machine" he added. It is still the fastest in the world and is now housed at the Fremantle Motor Museum along side other notable motoring memorabilia, including Aussie Invader II, Australia’s Land Speed Record Car (500mph/800+ kph).

In the early 80’s Rosco purchased a Jet powered dragster (Aussie Invader) with the idea in mind to take on the Australian Land Speed Record. Numerous speed trials around Australia and  “Car Burns” at shows made Rosco a household name in Australian Motor Sport. In 1987 serious consideration was given to building a specific Land Speed Vehicle as the jet dragster was unsuitable for speeds  in excess of  300mph (500kph)

Behind Rosco’s success to date, there is the stability of a tireless hardworking woman. Rosco's wife Cheryl is the Office Manager, Girl Friday, and “mother” to the entire team. She is the glue that bonds the project and is instrumental in preparing and sending proposals to a multitude of companies and organisations and following up the leads that come in.

For a man and his wife to devote their life and entire resources to something they believe in is truly inspiring and they deserve the support of this great country. If history is any guide, persistence, determination and dedication to a dream will result in an Australian holding the World Land Speed Record.  Australian Ken Warby already holds the World Water Speed Record at 318 mph (512 km/h) and Rosco is determined to make it an Australian double! 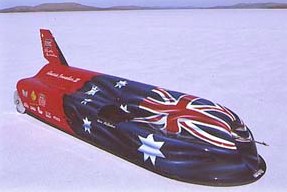 Rosco McGlashen has just announced his intention to go for the 900mph record. Currently the fastest Australian, with a record of 642mph with the Aussie Invader 2, McGlashen is working a deal with SpaceDev, the same company that was integral in the recently successful SpaceShipOne shot last June. This image is of his concept car designed by John "Ackers" Ackroyd of the Isle of Wight.

Rosco McGlashan is looking to drive the fastest car on Earth - strangely enough, synthetic rubber and laughing gas could be the ticket.

After seeing X-Prize winner SpaceShipOne, McGlashan, "The fastest Aussie on Earth," wondered if rocket motors could propel him up to speeds of 1,609 km/h. So he called up SpaceDev, the company who provided the rocket motor technology for the world's first private-sector astronaut mission. He also enlisted the help of John "Ackers" Ackroyd, the designer of 1983's land-speed-record-breaking car Thrust 2. They came up a wingless rocket-powered jet fighter on wheels. 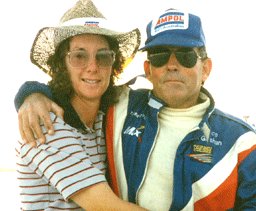 The unique design by project engineers and designers Dr Ian Sutherland and John Akroyd shows that Aussie Invader 5R (R for rocket) will be much larger than the jet powered Aussie Invader 2 and 3 Land Speed Record vehicles.

To accommodate the fuel cells required it is being built at over 55 feet in length and almost 10 feet in tailfin height.

This website is Copyright © 2013 Bluebird Marine Systems Limited.   The names Bluebird, Solar Navigator™,Blueplanet Ecostar BE3™, Utopia Tristar™ and the blue bird in flight

logo are trademarks. All other trademarks are hereby acknowledged.